Making a mirrorless camera is something Canon avoided for a long time and even though they finally entered the market a few years ago the EOS M series hasn’t been very popular. That has changed with their latest mirrorless camera, the EOS M5 which is pretty much an EOS 80D in a different body and priced around $979.
How does it perform when it comes to shooting video?

Find out in our 6-minute video review below:

The EOS M5 has its own lens mount but can also take EF and EF-S lenses by using a dedicated adapter. The camera rental house where we got the camera from didn’t have any EF-M lenses so we used regular EF lenses with the adapter.

The camera has a 24.2 megapixel CMOS sensor and can shoot videos in 1080p with up to 60 frames per second. Once again Canon didn’t include a 4K video mode but instead a few useful video features. The two main features are the Dual Pixel CMOS auto focus and the 5-axis image stabilization.

The camera also has focus peaking which works very well. It also has manual audio control, a microphone input but unfortunately no headphone jack which means you can’t listen to what you’re actually recording. As usual when filming with Canon DSLRs I set the picture profile to neutral and lowered sharpness, contrast and saturation as much as possible to have as much control over the footage as possible when it comes to color correction and grading in post.

The continuous auto focus in video mode works great and is very reliable especially when using STM lenses. Just like the EOS 80D the M5 has different AF modes. The tracking mode keeps a certain object or a face in focus, even when moving the camera away. The touch focus is useful to change focus between different subjects simply by tapping on the screen. The performance hugely depends on the lens’ auto focus and not just the camera. The 5-axis image stabilization is hidden in the menu under the option “IS setting”. You can choose between two modes. One is called “enable” and the other one “enhanced”. Both crop the image to stabilize the footage. While this feature is very useful when using lenses without any built-in image stabilization, the footage looks blurry due to the loss of resolution. The lack of detail is especially visible when setting the IS to “enhanced” which should be used when walking to avoid extreme shakes. Sometimes the in-camera stabilized footage also has that kind of wobbly look like shaky footage that has been stabilized in post. This is occurring more when shooting with lenses that have a focal length above 35mm.

You can watch a comparison of the different IS modes side by side to get a better impression of how well the stabilization actually works when using a lens without IS. The lens used for the shots below is the Tokina 11-16mm F/2.8 wide-angle at F/8 to make the video is not too soft.

When filming under low light conditions the camera performs okay. Everything above ISO 3200 should be avoided, otherwise heavy image noise is visible.

When it comes to capturing photographs, the EOS M5 shows its true strength. The pictures are detailed and crisp and the colors and dynamic range also don’t disappoint. While the photographs look lovely, the videos still look like old T2i footage from 2010. Not much has changed since Canon’s first HDSLR when it comes to the video quality. There’s less moiré and aliasing as well as less image noise but the overall lack of detail makes it hard to enjoy shooting video with Canon’s first mirrorless camera.

From a photographer’s point of view there’s not much to complain about. The camera is small, easy to control and the photos look great. But from a filmmaker’s perspective the EOS M5 doesn’t have many improvements. The main issue still being the lack of detail and overall blurry look of the footage captured in 1080p. 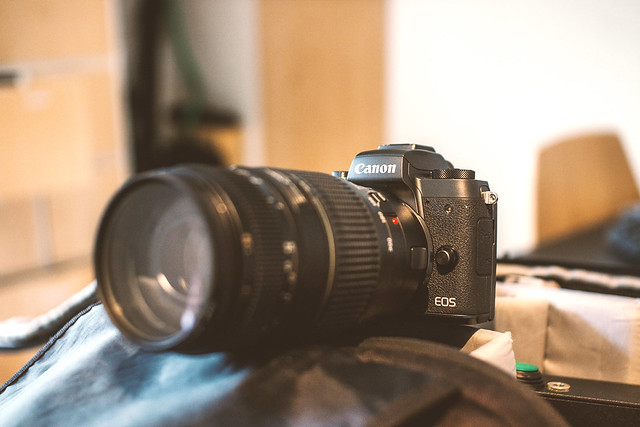 Considering the pricing of almost $1.000 (without any lenses or the EF-S lens adapter) the EOS M5 is not an entry-level camera and doesn’t come in cheap. It can be compared to the EOS 80D which is one of Canon’s most popular DSLRs. If you mainly shoot video I think it’s better to take a look at the Sony A6300 or the Panasonic G85 which is a simpler version of the GH5. Both shoot crispy 4K footage and play in a complete different league when it comes to recording video.

If you want to buy the camera you can order it HERE at HERE and HERE at Amazon.