The Zhiyun Crane is a hand-held 3-axis gimbal that is designed for DSLRs and mirrorless cameras with a weight up to 1.2kg. The camera stabilizer is priced around $650 which is a good price compared to similar products on the market right now (July 2016).

You can watch our video review below:

All three axis of the gimbal can be rotated 360 degrees. The Crane has a joystick to adjust the axis depending on how the angle should be. Zhiyun also offers a free Android mobile app that can be used via Bluetooth to remotely control the axis and to calibrate it. The gimbal has three 32-bit MCUs running at 4.000 hertz.

Below is a short video featuring some of our favorite gimbal shots so far:

Even though it might seem like the Crane is perfect in any way that’s not the case. When moving the gimbal fast we sometimes had some vibration and jitter issues that are visible in the captured footage. This has not been a big issue so far but if you’re thinking about getting one just keep in mind that the footage won’t be super smooth all the time.

Another thing to keep in mind is that such a gimbal isn’t made to be used with accessories like on-camera microphones or external monitors due to the small available space and the weight limit of course. Maybe a tiny mic can be used but something like a VideoMic Pro is already too big. This gimbal comes in handy when it comes to small setups and quick shoots. It’s also ideal when travelling because it’s compact and can fit in a backpack.

If you want to see more shots of the Crane check out the Flickr gallery below! 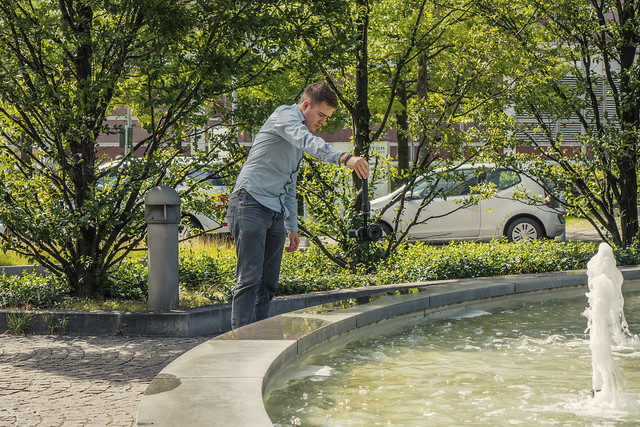 Inside the grip are two batteries that last for around two hours when being used continuously. The Crane supports 18650/26650 type batteries. Below the grip is a ¼” screw thread which is quite useful to mount the gimbal on a tripod for example to balance it before the actual shoot. At average the balancing only took two minutes sometimes even less. The Crane has adjustable screws for that just like other gimbals.

We have used the gimbal on two big commercial projects and it performed great. There was barely any footage that was not smooth and steady. Overall we are pretty happy with the performance especially when looking at the price of $650.